This is a list of the businesses I would like to create, with the right partners. If you're interested in joining me in making any of them happen, let me know. Think of it sort-of like Y Combinator's Request for Startups.

I envision a whole family or network of businesses, all operated under the same set of values and commitments to outstanding service, care, and integrity.

Some of the business are going to grow huge, and some are not going to make a huge impact financially, but they may still be important to us for other reasons.

The criteria is always that we create things we'd like to see in the world, and we figure out how to make it a profitable business that we'll want to keep running and improving for years.

It's not about the big flash in the pan, but about the slow, methodical, careful iteration of something we care about, day after day, year after year. Sticking with solid fundamentals.

Our secret sauce is to serve more deeply than anyone else in the market. 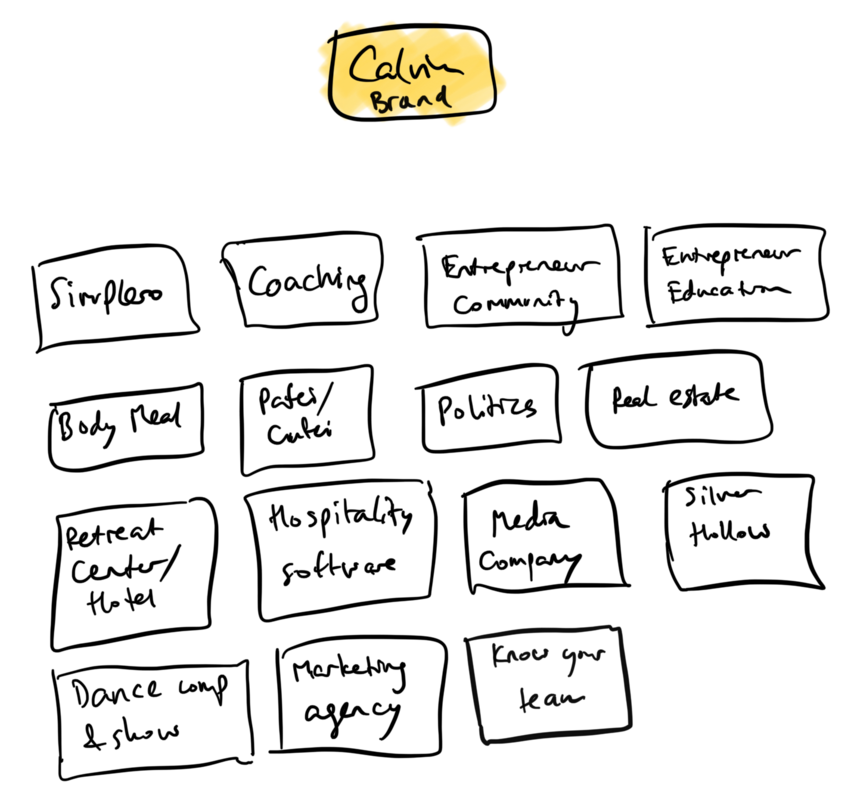 A place in the mountains, overlooking the ocean, where we can have creative events and workspace. You will feel the nature there. We'll have at least 100 rooms, each with its own outdoor space. Beautifully done, great rooms, great service. Similar to Belmondo El Encanto in Santa Barbara and Calamigos Guest Ranch in Malibu. We'll have great facilities for work, as well as for relaxing and connecting with nature. Open fire. Views. Swimming pool. Excellent restaurant and bar. Meeting, workshop, and workout spaces. Pet friendly. Horses, because horses are beautiful, and gifted healers. We'll have a music production studio because music is amazing.

We want it to be a space that opens people's hearts and minds when they get here. We want to create an environment in which people can mingle, whether they're famous or not. As we do this, we'll also create the software to run such a place, and that'll become its own separate business. We'll create it by building it for ourselves, just as we did with Simplero. This resort will also act as the physical hub for all of our other businesses, most of which will operate virtually with no physical presence.

Let's teach people how to do entrepreneurship that's in alignment with their design. It's a combination of basic business fundamentals such as delivering great products and services, marketing based around being of service, clear strategic thinking, and of knowing who you are, what your gifts are, and what you're here to do, so we only do things that really matter, and only in ways that bring out the very best in everyone involved.

We'll use a variety of self-awareness tools, such as hand analysis, human design, wealth dynamics, etc, to gain insights about ourselves, and then we'll figure out how to apply these insights in practice.

It'll be a program with several levels, parts of which are online, and others offline in person, ideally at our resort above. We'll offer sponsorships for particularly gifted and needy individuals, and we'll recruit top talent from this training to run our various businesses. The education is modeled on Joseph Jaworski's American Leadership Forum, as well as on ArsDigita's Boot Camps.

I want to test the thesis that there's always a way out of a stuck situation when you learn to change from a victim to a creator in your life. The idea would be to provide a bed to sleep in, a shower, clean clothes, food and water, and a foundational education in life: Thoughts, emotions, self-awareness, and a growth mindset.

We would have sponsors to help pay for rent and food, volunteers to help run the place, seek to get donated food from relevant food businesses, and then offer the training and set specific goals for people to become self-sustaining and happy, productive members of society. I believe everyone has the capability, if given the right environment and opportunities.

Happiness comes through overcoming the thought patterns, such as feeling like a victim, that cause suffering, and in actively contributing to other people's lives. There'd be a zero-tolerance policy for drug or alcohol abuse, or for not attending training.

We can have these shelters all over the world, sharing best-practices between them, and they will of course also have access to the material from the entrepreneurship education.

Creating the blueprint for politics and governance given everything we know as humanity at this point.

Completely rethinking how we do nations and politics.

This is an app that includes a bunch of vocal training exercises from a variety of sources, and helps you keep up a daily practice. It'll show/play you the exercises, listen to you singing it back, and then show you how good your pitch is. It's flexible in terms of time and range, so you can set it a weekly target, such as 20 minutes/day 6 days/week, but then on individual days you can tell it to go shorter or longer, or let your range expand or contract upwards or downwards, depending on the shape you're in today. It'll come up with a fresh program each day, and track your progress over time. You can buy additional exercise packs, co-created with the biggest vocal teachers out there.

Simplero is already a successful and profitable business with customers in over 20 countries, and an incredible team. We want to keep growing Simplero, to the benefit of the many people around the world currently touched by Simplero, and the millions more to come in the years ahead.

I think there's room for two kinds of music that I'd like to be involved in. One is music that opens hearts, minds, and bodies, and inspires deep connection, deep self-love, deep honesty and authenticity in people. It's pop music, but without the usual drama bullshit, without the superficial, confused romantic love, yet without being preachy or, by golly, "spiritual" or any such nonsense. We want to aim squarely for Billboard Hot 100 territory. The other kind is background music that doesn't require active listening, and that doesn't distract when doing focused work, such as coding or writing, yet which has a quality that will open hearts, minds, and bodies. I'm not talking binaural beats here, that's too heavy-handed, more something like 5 rhythms, but not exactly that, either. We'll have to experiment and find out. Think of it like muzak or "spa music" that's actually fucking amazing.

Am I the only one who thinks all the neck pillows out there suck?

Despite how many writing and note-taking apps are out there, and how many of them I've bought and tried, I'm still amazed that I haven't come across one that does what I need.

For most things, Apple's Notes app is great, especially now that you can have a "new note" button in control center. So let's not try to recreate that.

What I want is a place for slightly more "serious" writing. I want an app that's great for journaling, writing blog posts and articles, and writing books.

Personally I prefer markdown and similar very explicit markup over typical WYSIWYG or rich text editors, and I like that it does show me what it looks like visually as I'm writing. Lots of apps does this reasonably well, such as LetterSpace, Bear, iA Writer, and more. It's when it comes to organization that I'm having issues. LetterSpace and Bear both use tags. I think tags can be useful, but I have trouble with where in the document itself I write the hashtags. If I write them right under the headline, then they take up space up there, and it's a nuisance to organize because I want to get straight to the writing. If I put them at the bottom, I have to always make sure they stay there, and I have to keep staring at it as I'm writing. I honestly think the UI should just remove it from the document itself and put it somewhere else. You can still add it to the bottom of the file as you're saving to the file system, but put it in a sidebar while I'm editing.

The other issue is that hashtags are not a great tool for my main organizational needs. They quickly get out of hand, and if I use the app for a long time and have a lot of old tags, then the list of tags get too big and too disorganized, and I can't order them. To change or rearrange or subgroup tags, I usually have to edit a ton of individual documents. That's silly.

For organization, I want to have a set of projects. When I'm working on a book, I want to organize the chapters in order, and I want to have a separate list of notes containing other things that aren't going to be part of the final manuscript, such as research notes, outline, loose thoughts I don't know where will fit, etc. When journaling, I just want the notes listed chronologically by the date the note was created. The point being, each project can have its own sort order.

In the left hand sidebar is a list of projects, which you can drill down to a specific project, which then lists the notes in that project. You can archive projects so they don't show up in the left sidebar. I'm not sure we'll need to organize projects further with categories or tags, but I'll definitely want to be able to order them in a way that's meaningful to me, eg. Journal + current book project up top, then the rest.

And we absolutely need to be able to open a document in a separate window, and to have several windows open with the same document at the same time, so we can see different parts of it at once. Live sharing and editing across the internet with others, like Notes and Google Docs.

Behind the scenes, any changes will be checked into a github repository, so we have the entire change history, and nothing's lost. It'll automatically do a check-in each time there's a logical break with a meaningful amount of changes.

I'd personally love to have a tool where I can keep a big picture overview of candidates and team members. I want to see their different personality tests and assessments—I'm partial to Kolbe A Index, Wealth Dynamics/Talent Dynamics, StrenghtsFinder, and Hand Analysis. I'd love to see their long term dreams and aspirations. Their favorite activities. What motivates them.

I'm sure something like this exists for the enterprise, but I haven't seen anything for small companies like mine.

I'd want it to integrate with these different assessments, so you can send people to take the test right there, and we'll get the results and summarize the key information, linking out to the full reports. It would also include our company values, and a checklist for where they're a great fit, and where we've got work to do... or maybe point to a mismatch, and indicate we might be better off parting ways as friends.

A tool like this would be a great help for me in evaluating and helping my team members into their perfect roles, where they'll really excel and shine, be happy, and do their best work every day. I can do it in a Google Doc, but that's more work.

It could also be super helpful in recruiting. Send people to personality tests, compare them against the company values, and see how they fare.