I'm Calvin Correli. This is my story.

I'm a serial entrepreneur, spiritual teacher, author, and the founder and CEO of Simplero. Ten years ago I would have never thought that my life would be the way it is.

For most of my life, I was pretty fucked up. I didn't want to be fucked up anymore, so I changed it.

My relationships were codependent and dysfunctional. My body ached, I never worked out, was chubby and bloated, drank too much, and I had this constant undercurrent of low-grade anxiety. Everything has changed.

My Story: The Problem

In fact, the name my parents gave me was ... Lars Holger Pind.

It was early Thursday evening in early 2003. I had called an advisory board meeting for my software company CollaborAid, and we'd just wrapped up the official session, beers on the table, when one of the advisors, Thomas Madsen-Mygdal, looked me straight in the eye, and said:

"Lars, we've been here for three hours, and I still don't know what you want!"

Time stopped for a moment.

A crack had opened inside of me.
I didn't realize it then, but this was to be a pivotal point in my life that would send me on a multi-year journey into the depth of my own being.
Part of me thought "What do you mean? I've told you what I want: I want to be successful, I want to create a 50 person company and make lots of money."

Another part of me thought "What do you mean? Am I allowed to want something in business? I thought I was supposed to check my feelings and my personality at the door!" And finally, there was a part of me—an intuitive part buried somewhere deep inside—that knew exactly what he meant.

Yeah, what do I want? I don't know what I want. I can't even really feel myself. That fateful question opened a doorway inside of me, and I walked through it. Reluctantly. Tentatively.

What do I want?... That fateful question opened a doorway inside of me and I walked through it” 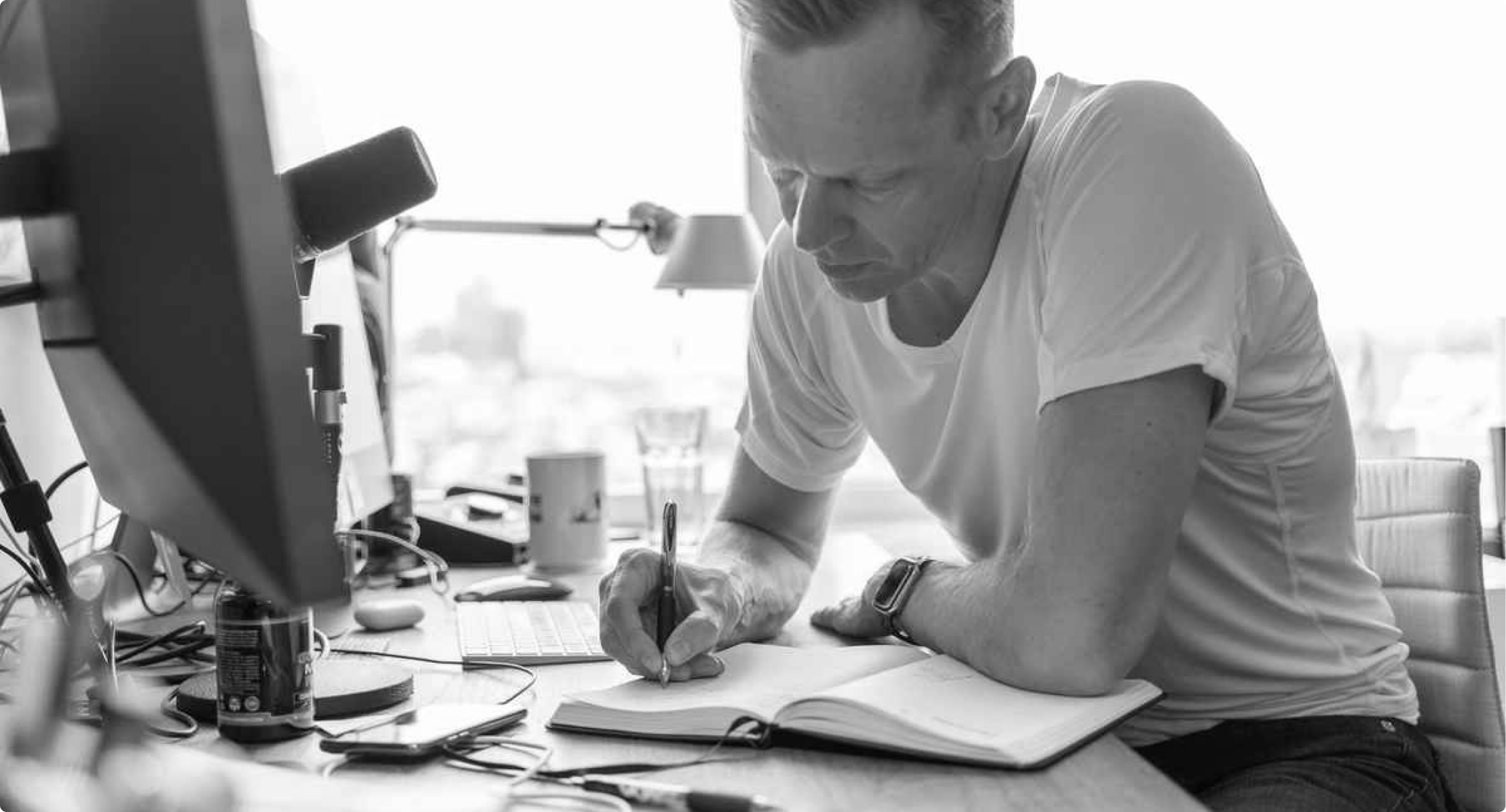 My Story: The Transformation

It was scary territory. Not only was I was a mess inside. All my feelings were tied up in a knot, like a bunch of cables that no-one's tried to untangle for years. I also had this belief that if you needed any sort of outside help—a coach, mentor, or therapist—then you'd already lost, and might as well give up. Did I mention I was pretty messed up?

I overcame my fear, and started talking to a psychotherapist. Then I saw a coach. Then a spiritual teacher. Then I discovered Body-SDS.

One thing led to another. I realized that this stuff was actually not scary or dangerous at all. It was super helpful. I realized that it was not only okay to get help with the "head trip stuff", it was essential. It doesn't make you wrong. It makes you great.

I became a coach myself! I remembered that I'd actually been very spiritual as a kid, but in my teenage years shut that side of me down. I now opened it back up. All of this work led to a Eureka moment five years later.

It was late February of 2008. My then-wife Caroline and I had just bought a house together that we couldn't afford. Bills were piling up. I was freelancing as a developer, and typically when I needed cash, finding a gig was easy. Not this time. Everything fell apart. Even contracts that were signed and jobs that were started fell through in dramatic fashion. Greenpeace, whom I'd worked with for six years at this point, called me up and let me know that they'd outsourced my work to India. Oh, great!

I realized that it was not only okay to get help with the “head trip stuff”, it was essential.”

The whole thing was so grotesque that I finally thought to myself: Is this the Universe trying to tell me that it's time I stop chasing the next paycheck, and find out what I really want?

I decided to pursue it. But how? Hmm. What would a coach do?

I sat down and wrote out some questions, such as:

Then I went through and answered them. I hadn't even gotten half way through when it suddenly hit me: I'm here to integrate spirituality and entrepreneurship. My Story: The Success

It landed as a complete vision:

This is how we solve all the challenges we're facing in the world: Through spiritual entrepreneurship.

This is how you choose which companies to invest in: If the founders are living their life purpose, and they do the inner mental, emotional, and spiritual work, in addition to the outer concrete work.

This is how you maximize your chances of success: By aligning with the forces of the Universe.

I had two thoughts: I'm the first person in the whole world to realize this.

And: I gotta teach this to all the entrepreneurs I know.

On the second: Yeah, there wasn't a huge market of entrepreneurs hungry to learn spirituality.

But it led me to learn online marketing, and discover online courses, which then led me to create Simplero as the best integrated platform to sell courses, coaching, and other information products.

This realization completely changed my life.

Before this moment, I was chasing success anywhere I thought it was hiding, and found none.

After this, everything I did fit together. There was a common purpose behind it all. It all connected. It has ever since.

That's the power of knowing your purpose. Fast forward to 2013. I'd been through a divorce, and gotten married to Nomi.

Nomi and I were desperate to move to the US, but our visa had been denied.

Nomi asked me: "What do you say we go to India and practice Ashtanga?"

Turns out it's a form of yoga that comes from a city in South India named Mysore.

That's where we went.

We ended up living there for a year, and on my birthday in 2013, Nomi asked me a bunch of big-life questions.

One went something like "if you could do anything at all, what would you do?"

To which I promptly replied "I want to be a special advisor to the President of the United States on conscious nation building."

Now that may not sound that weird. Or maybe it does.

But the thing is: I didn't know what that meant. I'd never thought this thought before. And the minute it escaped my lips, I started crying.

I cried tears of awe for at least the next 20 minutes.

I still didn't know exactly what that meant, but I could feel it. And it felt very real, and very awe-inspiring.

That experience stayed with me, and some years later, I started spending more time studying and educating myself on politics.

As a kid, I was always dreaming about what my country would look like if I got the chance to design my own country from scratch. I combined that innate curiosity with my skill as an engineer, entrepreneur, and spiritual teacher, and that passion eventually became Notable Nation.

Mine is a story of identity. Of discovering who I truly am, and becoming that person.

Then at the end of 2017, another pivotal moment happened.

Nomi and I started working with Body-SDS founder Bengt Valentino Andersen 1-on-1 (or, I guess, 1-on-2) for both business, health, and personal life. Bengt is the best damn therapist, teacher, and knower of human beings on the planet.

At this particular session, he challenged me on my masculinity. He said "look, Calvin, you're 80% in your feminine, and your masculine is only 20% developed. We've got to flip that around so you're living primarily from your masculine."

I fought him a bit. Started defending myself. But he made me realize that he was right. And that developing my masculine side was key to solving every single challenge that I was facing in my life—business, health, relationships, creativity, and my ability to manifest my purpose.

So I made it my mission to grow that side of me. It involved exercising 8 hours a week (#8hoursaweek), and it involved reconnecting with my inner boy, and helping him grow up to be a healthy man, by being the kind of father for him that he needed, and that he didn't have growing up.

Immediately things started shifting dramatically. This was the key piece I'd been missing for so long. As my masculine side started developing, everything in my life started clicking into place. Things went from being a struggle to actually working.

Mine is a story of identity. Of discovering who I truly am, and becoming that person.

It's been hard work, but it's also been deeply rewarding. I've gone from struggling with business, health, relationships, creativity, and purpose, to having all of those areas working in perfect synchrony.

I've gone from being an irritable somewhat mean-spirited soy boy to being a strong, proud, healthy man.

I've gone from being this Gordian knot of mental, emotional, and physical baggage to being pretty darn clear and fired up.

I've gone from smoking a pack a day, drinking quite a lot, eating like crap, and never working out, to having six-pack abs, a body I'm proud to see in the mirror, and having more energy and stamina than ever.

I've gone from being bankrupt to having four businesses making millions of dollars, and a team of 35 people.

I'm here to tell you that you can do the same.

Wherever you are today, if you have the determination and perseverance, you can do the same.

I'm not going to tell you it's going to be easy. This shit is hard. If it were easy, everybody would do it. But you can absolutely do it if you want it bad enough. I did!

The first step is stop being a victim, deciding what you want, and then taking the first step towards creating that. One final note. How did I end up being named Calvin? I'll tell you.

During the many years that I was struggling, I kept asking myself:

"Do I really have what it takes? Maybe I should just give up, stop chasing my dreams, get a regular well-paying job, and numb out with some more pasta and wine."

Nothing in the world can take the place of persistence. Talent will not; nothing is more common than unsuccessful men with talent. Genius will not; unrewarded genius is almost a proverb. Education will not; the world is full of educated derelicts. Persistence and determination alone are omnipotent.

If he believed this, and he ended up becoming President of the United States, then surely I could achieve what I dreamt of, if only I was persistent and determined enough. So I kept going, no matter what.

I was so inspired and moved by this quote, that when I changed my name in 2012, I took Calvin Coolidge's first name.

He died 41 years before I was born, so obviously we never met, at least not in this lifetime, but I will forever be grateful that he took the time to articulate this thought, and did it so well that it carried all the way to me, all the way over in Denmark, many years later.

I'm not sure I'd be where and who I am today if it wasn't for this.

Persistence and determination are omnipotent. What do you want? And who do you want to become?